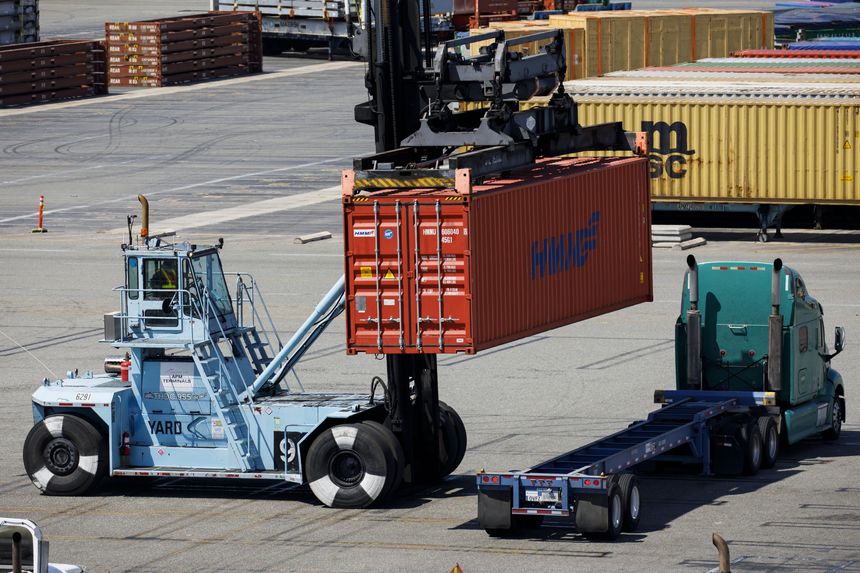 Labor talks between West Coast dockworkers and their employers are at a standstill because of a fight between two unions over who maintains equipment at a cargo-handling terminal at the Port of Seattle, according to people familiar with the talks.

The labor battle is complicating the talks that cover 29 West Coast ports and raises the threat of disruptions at major American gateways for trans-Pacific trade, including the country’s busiest container port complex at Los Angeles and Long Beach, Calif.

Representatives for the International Longshore and Warehouse Union, which represents dockworkers, and the Pacific Maritime Association, which represents the terminal operators and shipping lines, declined to comment, citing an agreement the two sides have to not discuss the talks publicly.

The two sides said negotiations are continuing. “Any rumors about what happens at the negotiating table are second, third or fourth hand,” said Jennifer Sargent Bokaie, the spokeswoman for the ILWU.

The ILWU, which represents more than 22,000 West Coast dockworkers, wants its next labor contract to ensure that a cargo-handling terminal at Seattle uses ILWU workers to maintain and repair equipment.

The Pacific Maritime Association says it can’t award that work to the ILWU because the National Labor Relations Board ruled in 2020 that the International Association of Machinists and Aerospace Workers has jurisdiction at the terminal.

People familiar with the talks say the union won’t turn to other significant issues, such as wages and the right for employers to bring more automation to the docks, until the Seattle disagreement is resolved.

Retailers, manufacturers and agricultural exporters who rely on the West Coast to connect to Asia are following the talks closely, and some importers are diverting cargoes to the U.S. Gulf Coast and East Coast ports to avoid potential disruptions. The talks are also being monitored by Biden administration officials trying to ease supply-chain congestion and lower shipping rates as they attempt to reduce inflation.

The dockworkers have been working without a contract since the last multiyear agreement expired July 1 and the sides couldn’t agree on a contract extension.

Past negotiations have been highly contentious, with disagreements between dockworkers and their employers during talks in 2002 and 2014 triggering shipping delays that lasted for months. President Biden and senior administration officials in recent months have met with union and shipping industry officials to impress on them their desire that the talks go smoothly.

The ILWU and the PMA began talks on May 10 in San Francisco. They released a joint statement on July 26 saying they had reached a tentative agreement on health benefits.

That still left the two sides to find consensus on major issues including wages and automation.